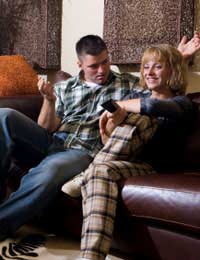 Flatmates becoming romantic partners is always a touchy subject, particularly if the two people involved have other flatmates as well. To avoid suspicious behaviour or making other feel uncomfortable, any flatmates who think they would like to become romantic partners should show enough respect for themselves and all others by confirming the relationship, setting house rules, taking time before “moving in” together and understanding what might happen if they break up.

It might not be your usual style to kiss and tell but when you are kissing other flatmates then the telling part becomes a matter of respect for everyone else in the home. To begin with, the flatmates involved will need to admit to themselves that they have a new relationship. If at all possible both flatmates should be very clear about their arrangement. Is it exclusive? Is it for public knowledge? Both of these questions should be answered very clearly to avoid any misunderstandings in the future. Once these definitions are settled then the two flatmates will need to speak to any other flatmates about the situation. As a matter of respect, all flatmates should come together to review the house rules in light of the new circumstances.

Every set of flatmates is different about their house rules. Some may be stringent, some may not have any and some may have lax rules that seemed to have grown by themselves rather than be set. However, when a pair of flatmates become a couple, it is in everyone’s best interest to review any existing rules and to consider making new ones. For example, overnight guest and socialising policies may need to be reviewed and if any flatmates share a bedroom then they may need to negotiate new “alone time” policies. At this time the new couple should also take pains to assure any other roommates that they are not being pushed out. Though the couple may not realise it, third parties can quickly come to feel as if they are intruding on something private and so should be assured that they are still rightful flatmates.

Moving in together is usually a significant step in a romantic relationship, but for couples who already live together these lines between couple time and private time can become blurred. One way of defining this “moving in” is to use bedrooms, rather than homes, as the arbiter. When a couple decides to share a bedroom then everyone involved may consider them moved in. However, this may raise questions about financial arrangements. If a bedroom is suddenly free, does that mean that a new flatmate can or should be recruited? And if such is the case, how is the new rent divided? Again, these can be tricky subjects and so are best dealt with openly and honestly by all flatmates.

No one likes to think about breaking up when they enter a new relationship, but for flatmates this is a very real concern. If a couple splits, do both flatmates remain in the home? Could both partners emotionally bear that? Could both partners remain civil and keep from turning the home into a battleground? Would other flatmates be expected to choose sides? These aren’t easy questions, but they should be considered before flatmates decide to take their relationship to the next level.