Home > Case Studies > Buying a Home With Your Partner: a Case Study

Buying a Home With Your Partner: a Case Study 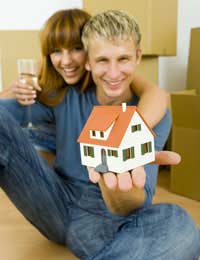 Buying a property with your partner can be a loving and happy time but it can also be a testing and stressful time. Case studies can be useful in helping you share the experiences of others.

Emma and Paul had been living together for about two years, they were not married but were in a serious relationship and decided they wanted to buy a flat together.

"Our first port of call was a visit to a mortgage broker where we went to discuss our options. When our wages were combined we had about £50,000, which the broker told us would normally mean we could borrow over £200,000, however on deeper inspection the mortgage broker discovered I had a large credit bill I had not been paying," says Paul.

Before any lender was willing to lend them money they requested that Paul paid off as much as he could from the credit card bill. Paul’s parents helped him out and he got the majority of the bill paid off.

The next hurdle was that neither of them had any deposit for a property, but lenders were demanding at least a 5% deposit. They wanted to spend around £180,000 on a property so they would need at least £9,000 as a deposit. They spoke to their parents who agreed to lend them the money to use as a deposit.

Emma says: "We agreed with our parents that they would get their money back and they trusted us that they would. I think they knew if they did not help us we would be stuck renting for a long time."

"We knew we wanted to buy in Manchester and noticed there were a lot of new build flats for sale in our price range. When we spoke to our advisor though he warned us that it can sometimes be hard to sell on a new build flat in Manchester because there are so many of them on the market," explains Paul.

If however the market picked up they would probably be able to sell it and make a profit. They decided they did not want to take the risk because they were already stretching their budget as it was. They opted for a ground floor flat of a large semi-detached house in a nice area and close to the city centre.

Balancing Out The Mortgage

Paul was earning more money than Emma but they both signed up to the mortgage jointly. Paul decided that he would contribute more to the bills because he was on more money, this enabled them both to pay an equal amount towards the mortgage. They exchanged contracts on the property and moved in together.

Two years after living together they had a fall out and decided they no longer wanted to live together. Paul liked the flat and he wanted to stay in it. They had only been in the property a couple of years so if they sold it they would not make a lot of money on it. Paul talked to the mortgage advisor and he agreed that Paul would be able to afford the mortgage on his own because his wage was higher.

Paul says: "I thought when we broke up that we would lose the flat as well. I was able to find the money though to stay in the property, I could not have done this if my wage had not been so good."

In order for Paul to take on the property himself he would need to pay back Emma’s parents their £4,500 deposit and he also agreed he would pay Emma £5,000 to buy her out. He did not have any money saved up so he had to take out a loan to pay them back the money. His job was secure and he was likely to get a pay rise soon so he felt comfortable taking out the loan and managing the money himself.