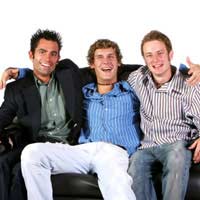 It is becoming increasingly difficult to get a footing on the housing ladder, so it makes sense to share a mortgage. Case studies can give you a useful insight into what it is like to find a joint mortgage.

Tim, Adam and Stuart were three young professionals looking to buy a property together in London but they did not know how to start looking for a mortgage.

The first place they visited was Tim’s bank, he thought because he held an account there they would be able to offer them the best deal.

"While the bank was able to discuss my finances with me they did not have as many details on Adam and Stuart but they were able to help all three of us work out how much we could afford to borrow. The bank also worked out how much our monthly payments would be. But after considering the bank’s proposition we decided we wanted to do some further exploring and find out if we could get a better deal somewhere else," says Tim.

All three friends were familiar with the internet and used it on a daily basis, so they decided to see what options they could find online.

They discovered there were a lot of specialist websites that were dedicated to people wanting to take out a joint mortgage. While Tim and Adam were happy to use an online service Stuart was not keen on making such a big decision and not being able to speak to somebody face to face about it. They decided that it would be best if they could speak to somebody who was not biased but was able to tell them about their options.

None of them had ever been to a mortgage broker and they didn’t know what to expect. They chose a mortgage broker that did not charge for the initial advice so they would not have to pay if they decided not to use him. During their first meeting with the mortgage broker he looked at their wages and their credit scores and told them how much they would be able to borrow. He was also able to search the whole of market to see which lenders were offering the best products.

Tim says: "I thought visiting a mortgage broker would work out to be a lot more expensive, but in the end I think we actually saved money on our mortgage."

The three friends found they had access to a lot more products and a lot of different options. The mortgage broker was able to find them a product that suited all three of them and it worked out as slightly cheaper than the deal with the bank would have been. They had to give the broker a small fee for arranging the mortgage, but they added this onto their mortgage so did not have to pay it straight away.

Advice Further Down The Line

Tim says: "We went back to visit the mortgage broker because we had received good service the first time around, we were still happy living together and wanted to carry on that way."

After a couple of years the three friends came towards the end of their original mortgage deal, they were quite happy living together and wanted to carry on living together. They were able to go back to the same mortgage broker and he was able to advise them as to what deals were available and what they could remortgage onto. They were happy with the advice they received and managed to find a good deal to remortgage onto.

Buying a Home With Your Partner: a Case Study